Here’s the news & current affairs in our Artz Blog!

Congratulations Jessica, and to her talented ballet & dance teachers, what a massive effort, being recognised as the best in Australia in your grade means all that hard work has more than paid off! 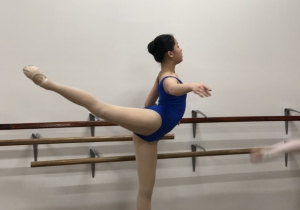 Four Artz Collective students have taken out the state award in their Borovanksy Ballet Exams in 2019.

The Special Medallion Award is only given out to students who receive over 88% in their ballet examination AND who show potential in their ballet. The award is decided on by the AICD (Australian Institute of Classical Dance) Borovanksy Ballet Syllabus state examiner after the examinations session each year.

These girls have done a magnificent job in their examinations and their hard work with their classes throughout the year.

Well done, girls! We are so very proud of you all.

1/5/19: We’re beside ourselves! Artz Collective is so excited, we are 9th on the Most Popular Kids Activity in Victoria & melbourne Regions! Go Team Artz!

Twelve awards for 2018! With 12 awards for our children’s programs in 2018 we’re super-happy. We also want to thank our dedicated teaching and administrative staff for their incredible efforts ! 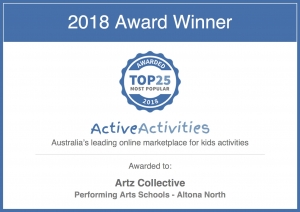 1/5/17: The Artz Collective is so excited to be named the #6 Most Popular Kids Activity in Victoria! Go Team Artz!

This alongside our other nine (9) awards for our children’s programs in 2016 has us all on Team Artz just wrapped. We want to thank our dedicated teaching and administrative staff and also to say that we’re so thrilled our students loved their Artz Collective weekly classes and the STARZ PERFORM holiday programs so very much – WOW, we’re simply blown away.

Congratulations to our Award winners for 2016!!Best All Round Performance: Alannah AttersallExcellence Cup: Jessica… 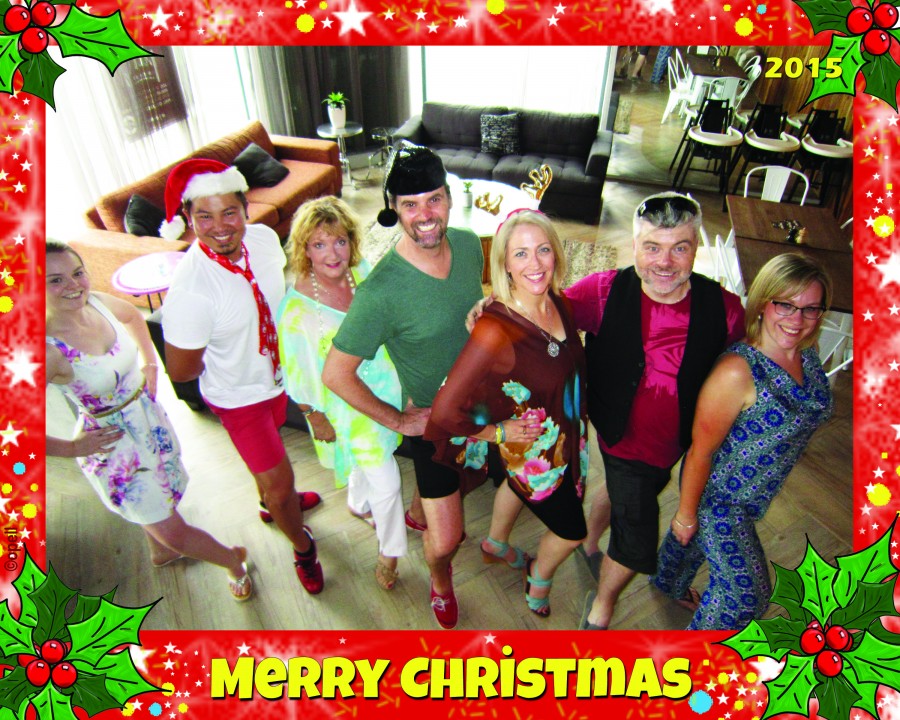 23/12/14 Holiday Activities to Ecourage Creativity in Kids in the West.

Summer Holiday Programs for creative kids are hard to find, that’s the feedback the staff at the Artz Collective in melbourne’s Western Suburbs are getting from parents. Holiday Activities for children that are not all sport based or indoor games & electronic gmes are increasing hard to find, at least this is what the parents of children in Altona North & the local surrounding areas of Point Cook, Laverton North, Altona, Hoppers Crossing, Werribee & Braybrook in melbourne’s west are passing on to Ziggy Clements & her team at the Artz Collective Performing Arts School. There are intensive dance programs around for experienced dancers, but for primary school aged children wanting to experience a broad based performing arts program with singing, acting & dancing, as well as visual and creative arts but not having to have many years of experience,  it’s tricky to find. Hence the Artz Collective’s Summer Starz Camp, a terrific program to bring out the creative in kids aged 5yrs to 13yrs.

No experience required for the Summer Starz Camp in Altona North, just lots of energy & a love of all things performing arts, from acrobatics, to drama & dance, music, singing as well as arts & crafts. Joining in is easy for children, unlike programs where children need lots of dance or music experience. But the program caters for different skill leves, so children can work at their own pace. And new friendships are made and confidence increased, that’s what the staff at the Artz Collective are looking to do! See their webpage for more details & how to enrol:

Not only is “The Wonderful Wizard of Oz” visiting Melbourne’s western suburbs this December, the loved & cherished story is having a re-telling of epic proportions for some lucky youngsters from Newport, Altona North, Point Cook & surrounds. These singing, dance and drama students from the Artz Collective in Altona North in melbourne’s west are getting to see professionals at work whilst they prepare for their upcoming performance of “The Tales of the Wizard of Oz” at the Williamstown Mechanics Institute on December 9th & 10th.

Time Minturn, an original member of the Australian Touring cast of “Boy From Oz” & “Sunset Boulevard”  plays the Cowardly Lion & joins Graham Pages, ( winner of the prestigious Green Room Award for his roles in the musical Prodigal Son & Peter Pan National Tour) as he plays the title role of the Wizard. For the past fifteen years Graham has been involved in Theatre in Education not only as an actor & director working with actors in Australia and New Zealand. Tim & Graham’s comic duo will be dropping in to star with with another darling of the Melbourne stage & well known performer, Ms Rachel Ledgerwood to feature as the Wicked Witch.

In an absolute master stroke, the students from the Artz Collective are now not only being coached by professional music theare performers, professional singers & dancers, but now they will actually be performing up on-stage alongside them, learning all the time through experience! What an opportunity for these western suburbs trained dancers, singers & actors.

Director, Ms Ziggy Clements, is “utterly thrilled” to have such seasoned & entertaining performers involved in this production, being so generous as to share their knowledge & pass on their skills. “I know having such a high calibre of featured artists in our production will be inspirational to all the Artz Collective students & am so proud to give them this opportunity”.

“The Tales of the Wizard of Oz” also featuring songs from “The Wiz & “Wicked” will be on at the Williamstown Mechanics Institute, December 9th & 10th & it will sell out, so be in quick! Bookings through Try booking  or: http://www.trybooking.com/GIGC

Congratulations to our own, Jesse Matthews, on an amazing first year studying classical ballet & dance at VCASS (Victorian College of the Arts Secondary School)  in Melbourne. Jesse has just been awarded the “Most Improved Junior Dancer of 2014” at VCASS, also gaining a leading role in “Carmen & Jose”, the VCASS Mathouse Theatre production for 2014. Studying ballet in classes at the Artz Collective was how Jesse made the decision to audition to study at VCASS as a full-time dance student from Newport.

A western suburbs boy all his life, Jesse hails from Newport & studied dance classes & ballet classes at Artz Collective ( now in Altona North ), with classical ballet teachers, Ziggy Clements & Joanne Adderley, to preprare for his VCASS audition.  Miss Joanne & Miss Ziggy helped Jesse make up his study plan, his fitness plan & his training plan for his audition, and he worked with his ballet & dance teachers alongside his parents to do as much as he could in the 2 years prior to his audition.

As we know from his dance training at Artz Collective, Jesse applies himself constantly & works really hard, and that must  have impressed his teachers at VCASS wityh his 2014 award. Jesse just loves his tap dance having also studied Tap Dance at Artz Collective, and his other big news, is that at Yr 9, he has now been promoted to the Advanced Tap Dance stream.

Keep up the great dedication you’ve always shown, Jesse, you have a stellar career ahead!

The “Popular Jazz Dance Syllabus” series that has dance teachers & examiners singing it’s praises, and it was made right here in Melbourne’s western suburbs. Located close to Point Cook, in Altona North, the founder fo the Artz Collective, Ms Ziggy Clements created the levels of Jazz Dance to progress from grade to grade with a step up each year. Each grade has exercises developing  the young dancer’s balance, core strength, majoy muscle co-ordination & movements encouraging students to turn (also known as pirouettes), to leap & to use kicks and arm lines that are the dynamic looking “trade marks” of Jazz Dance.

Using this grade system of progressing each year, the teachers at the Artz Collective have developed hunderds of terrific little Jazz dancers over the years in their weekly dance classes, and with constant upgrades and the ability to choose your music to keep it fresh for little music enthusiasts!
Katie Collins, CO of UE Agency representing dancers and music theatre performers has called this jazz dance syllabus her absolute favourite of all she has seen. A former dancer, and commercial jazz dancr who was sought after across Australia, Ms Collins having examined the grades in late September 2014, has given the latest updates in this jazz dance system all her support in it’s even spread of strength-building & fun exercises to engage children and adults as they learn jazz dance.e the latest music to use in class, the Artz Collective jazz dance syllabus is gaining praise all over Australia.